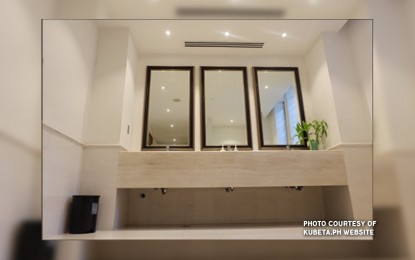 MANILA – The Department of Tourism (DOT) and Maynilad on Thursday partnered to promote proper wastewater management in Metro Manila, particularly in tourist destinations in the water firm’s service area.

In a virtual ceremony, the DOT and Maynilad Water Services, Inc. signed a memorandum of understanding on “Maynilad Kubeta PH X It’s More Fun in the Philippines” initiative that would award the Seal of Good Toilet-keeping to 24 tourist destinations such as parks, historical sites and restaurants in the region.

For establishments to be conferred the Seal, their restrooms must be consistently clean and well-maintained and equipped with basic fixtures and amenities, including a working faucet and flush, soap and toilet paper.

They also have to be compliant with government regulations on wastewater management via regular desludging of septic tanks, connection to Maynilad’s sewer network, or operation of law-compliant sewage treatment facilities.

Maynilad President and CEO Ramoncito Fernandez is optimistic this campaign would bring conversations about proper wastewater management to the mainstream and make people realize the shared responsibility of preserving the environment.

“Almost every Filipino knows what the term kubeta means, it’s also catchy enough to make the listener sit up and want to know what the campaign is about. The word kubeta evokes a sense of discomfort, pangalan pa lang mabaho na (the name doesn’t ‘smell’ good) — that’s exactly the intent of the program to create the kind of discomfort that leads to an increase in awareness and eventually malasakit (concern),” he said.

“The simple act of knowing and caring where the water goes when we flush a toilet is a step in that direction,” he added.

The DOT will name the nominees which will be subject to both document and physical audits led by Maynilad’s wastewater management team. Only those who will pass the stringent audit process will be awarded the Seal that can be renewed annually.

The DOT said the campaign seeks to underscore the importance of keeping toilets clean and comfortable for tourists and the general public and the need to comply with relevant laws and regulations.

“DOT is happy to collaborate with Maynilad for this campaign. This is very timely as the current health crisis highlights the critical importance of sanitation and hygiene,” said Tourism Secretary Bernadette Romulo-Puyat.

“[P]romoting quality, clean, and safe toilets in tourist destinations will also contribute to our efforts to gradually restart tourism activity in our country for tourism, public toilets are crucial. These should not be only clean but also safe and comfortable for tourists to use. Simple as it may seem, but toilets could make or break a tourist’s travel experience,” she added.

The campaign is in line with the Asean Public Toilet Standard, which aims to ensure that public toilets at tourist destinations in the region are clean, provide comfort and safety, and practices proper waste management.

The Seal of Good Toilet-keeping is the newest component of Maynilad’s 2016 Kubeta PH campaign, an integrated information, education and communication campaign that aims to spur positive action from various stakeholders on wastewater management.

Maynilad’s service area includes the cities of Manila (all but portions of San Andres and Sta. Ana), Quezon City (west of San Juan River, West Avenue, Edsa, Congressional, Mindanao Avenue, the northern part starting from the Districts of Holy Spirit and Batasan Hills), Makati (west of South Super Highway), Caloocan, Pasay, Parañaque, Las Piñas, Muntinlupa, Valenzuela, Navotas, and Malabon, all in Metro Manila; and the cities of Cavite, Bacoor, and Imus, and the towns of Kawit, Noveleta, and Rosario, all in the province of Cavite. (PNA)