The heirs of late retail magnate Henry Sy Sr. added $2.7 billion to their fortunes this year, staying at the top spot with a combined net worth of $ 16.6 billion, according to Forbes’ new list released Thursday.

MANILA, Philippines — The Sy siblings dominated Forbes Magazine’s latest list of 50 richest people in the Philippines, with the country’s tycoons defying pandemic headwinds after seeing their collective wealth rise 30% to $79 billion this year.

The heirs of late retail magnate Henry Sy Sr. added $2.7 billion to their fortunes this year, staying at the top spot with a combined net worth of $ 16.6 billion, according to Forbes’ new list released Thursday.

The 71-year-old former senator Manuel Villar, who has built a multi-billion dollar retail and property empire, retained the second spot after seeing his wealth rise by $1.7 billion to $6.7 billion.

Ports and casino tycoon Enrique Razon Jr. remained the third wealthiest in the country, Forbes said. Razon, who recently grew his portfolio after taking control of embattled Manila Water Co. Inc. from the Zobel clan, managed to increase his net worth by $1.5 billion to $5.8 billion.

Lance Gokongwei and his siblings — heirs of late JG Summit Holdings Inc. founder John Gokongwei — landed the fourth spot with a collective net worth of $4 billion, while Jaime Zobel de Ayala secured the fifth place with a fortune of $3.3 billion.

“Despite the ravages of Covid-19, the economy notched up double-digit growth in this year’s second quarter. Investor sentiment remained buoyant, fuelling a 13% rise in the benchmark stock index from a year ago,” Forbes said.

“The wealth of more than half the list members was up this year with four listees adding over $1 billion each,” it added. 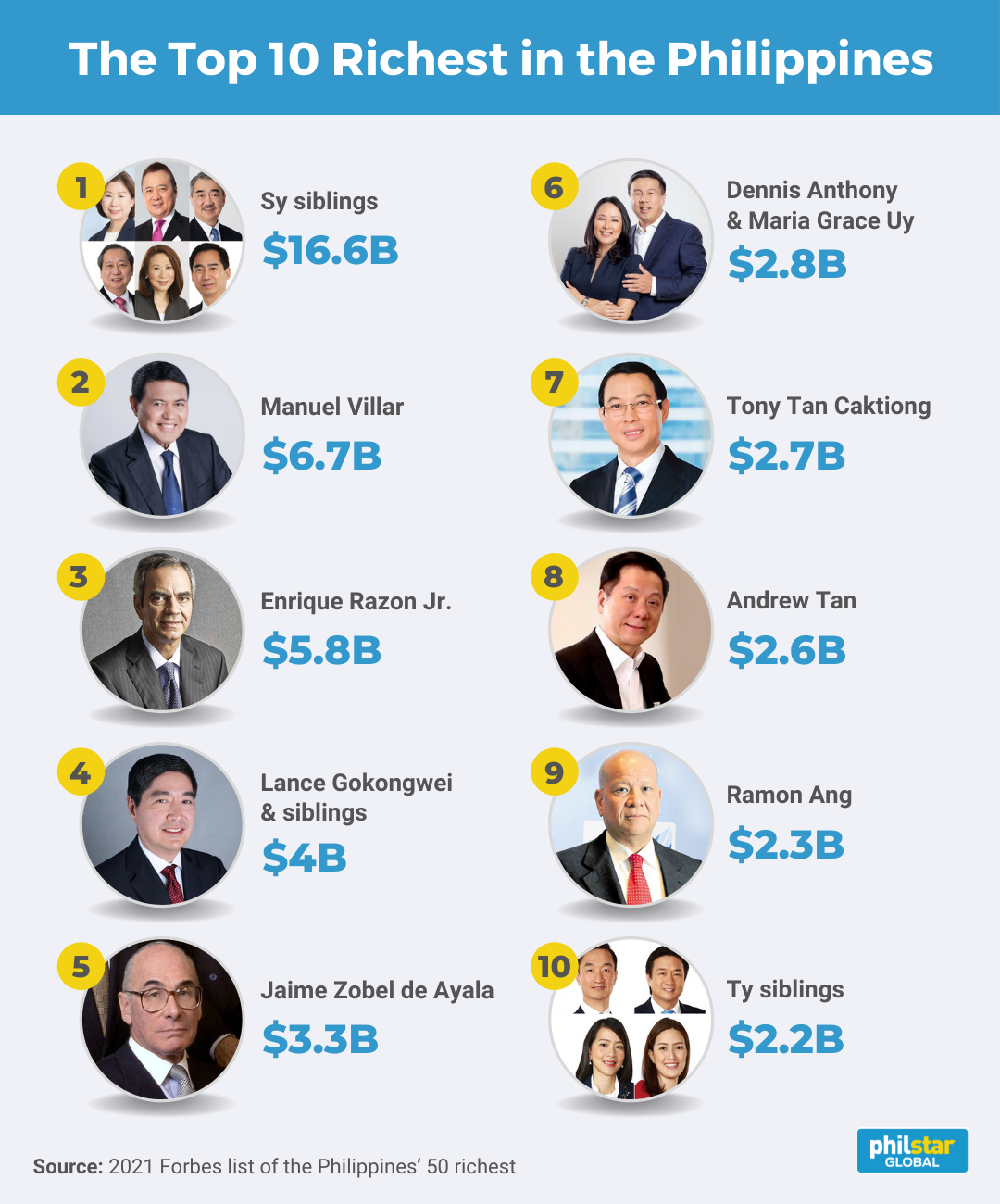 Forbes’ list of wealthy Filipinos was compiled using shareholding and financial information obtained from the families and individuals, stock exchanges, analysts, and other sources. The minimum net worth to make the list this year was $200 million, up from $100 million last year.

Unlike the billionaire rankings, this list includes family fortunes, including those shared among extended families. Net worths were calculated based on stock prices and exchange rates as of the close of markets on August 20, 2021.

That said, a notable newcomer was Dennis Anthony Uy, who co-founded broadband company Converge ICT Solutions with his wife Maria Grace Uy. The Uy couple took the sixth spot with their $2.8-billion fortune, which grew after Converge benefitted from increased demand for internet connectivity after the pandemic ushered in a massive shift to remote working and online classes.

Meanwhile, over a dozen billionaires ended up poorer this year than last year as the pandemic heavily weighs on their business empire, including liquor and airline magnate Lucio Tan, who ranked 12th with a wealth of $1.9 billion. Over the weekend, Tan-led Philippine Airlines filed for bankruptcy protection in the US after anemic demand for air travel widened the company’s losses that predate the pandemic.

There were eight newcomers in the 50 richest list this year, with Forbes attributing their debut to a robust stock market that saw mammoth fundraising activities this year.